‘Another Road to Serfdom’: Q&A With Timur Kuran 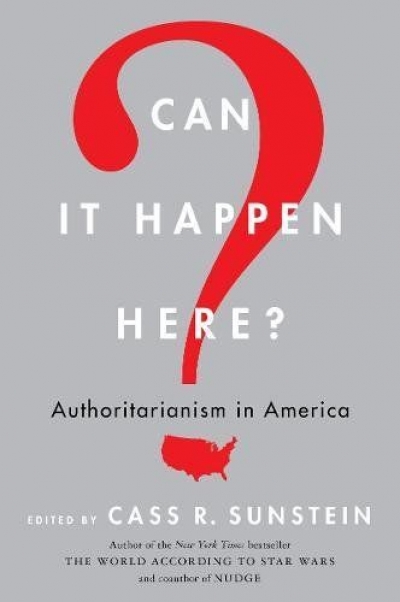 Is the United States sliding toward dictatorship? Can the nation reverse course, or is the damage already done?

Professor Timur Kuran is among the authors featured in “Can It Happen Here? Authoritarianism in America,” published on Mar. 6. Edited by Harvard Law Professor Cass R. Sunstein, this collection of 17 essays explores the lessons of history, how democracies crumble, how propaganda works, and the role of the media, courts, elections, and "fake news" in the modern political landscape — and what the future of the United States may hold.

“This is not a book about Donald Trump, not by any means, but there is no question that many people, including some of the authors here, think that Trump’s words and deeds have put the can-it-happen-here question on the table,” Sunstein writes in the introduction.

In his approach to the can-it-happen-here question, Kuran adapts Friedrich Hayek’s well-known treatise, “The Road to Serfdom,” which warns against the dangers of a state-controlled economy, to outline another road to serfdom: intolerance. His essay examines the rival communities of intolerance in the United States and how they can be exploited to solidify political and economic power.

What is authoritarianism, and how does intolerance feed into it?
Authoritarianism, or dictatorship, is a form of government characterized by strong central power and limited individual freedoms. Typically, citizens have little say in the selection of their political leaders. By contrast, democracy is a form of government in which power is decentralized, individuals have inalienable freedoms, and leaders are selected, for designated terms, by the people.

Democracies work well when citizens are prepared to resolve their differences through dialogue and compromise. This requires them to respect opinions other than their own as legitimate. If citizens start treating different opinions as illegitimate, dialogue becomes impossible, and society’s ability to resolve its problems peacefully diminishes. Frustrated citizens lose faith in democracy and begin yearning for a strong leader who will dictate solutions. Widespread intolerance creates a constituency for dictatorship.

More generally, why might democratic systems become more dysfunctional over time?
Several distinct mechanisms may lead to democratic erosion. In the 1940s, the economist Friedrich Hayek identified one of these. Collectivist ideologies of both the left and the right were endangering democracies by putting too much power in the hands of government, which was then be abused.

Sometimes the destruction comes from a foreign power. After World War II, in countries that fell under Soviet occupation, people were barred from choosing their own rulers democratically. Countries behind the Iron Curtain came to be ruled by puppet governments accountable, in one degree or another, to the Soviets.

Today, though, the chief danger to democracy doesn't come from foreign occupation or a collectivist ideology. The main danger lies in the erosion of a basic element of democratic governance, which is tolerance for differences of opinion and lifestyles. In the United States, the citizenry is split into intolerant communities — communities that are willing to limit the free exchange of ideas, and suspend the rule of law selectively, for some higher purpose. The spread of intolerance is hindering the peaceful resolution of social conflicts. It’s putting huge strains on the democratic system, making it seem dysfunctional.

What are some of the major economic and political motives that led to Trump’s ascension to the White House?
Trump’s rise to the presidency is a symptom of deep processes that have been corroding American democracy. Until a half-century ago, democratic competition in the United States involved a contest between coalitions that considered each other rivals, not enemies. Democrats and Republicans routinely cooperated with one another to forge cooperative solutions to entrenched problems. They negotiated in good faith to achieve compromises. Over the past few decades, though, rivals have turned into enemies. The dominant goal is no longer to achieve middle-of-the road solutions. Rather, it is to vanquish the enemy and to achieve one’s goals without giving an inch.

The politicians responsible for gridlock in Washington reflect the American electorate. The electorate is split into intolerant communities — communities that are willing to limit the free exchange of ideas, and suspend the rule of law selectively, for some higher purpose. At the most basic level, there are two rival coalitions that behave like primitive tribes. One consists of citizens suspicious of globalization, fearful of cultural change, economically insecure, and hostile to trade and immigration. There is no agreed-upon term for it; I think of it as the “nativist” or America-first coalition. The other coalition consists of groups that define themselves according to some form of identity, chiefly gender, ethnicity, or sexual orientation. We might call them the “identitarian” coalition.

The nativists and identitarians mistrust and despise the other. They do not consider each other legitimate participants in the political process. The intolerances of the two sides are mutually dependent. People hate, because they are hated. They exclude, because they themselves are excluded. They censor, because their own views are dismissed and suppressed. They lack empathy because the other side fails to recognize their key problems.

Trump rose to power by appealing to the intolerance of people I am dubbing nativists. His base is interested less in growth, building international alliances, and the other objectives shared by Republicans and Democrats alike for many decades. They want to diminish the identitarian coalition, which they hold responsible for all their problems. Trump won the Republican nomination and then the presidency by convincing large constituencies that he would defeat and humiliate identitarians.

You mention that even if Trump were to disappear from American politics, sliding toward dictatorship would remain a danger. Why do you think this is, and how can the country reverse course?
As I pointed out above, Trump is a symptom, not a cause, of the current dysfunction of American government. If he were to disappear, the search for someone who skirts the law would continue. Nativists would look for another Trump; identitarians would look for their own Trump, someone who would marginalize and contain his millions of supporters, as opposed to finding solutions to the problems that make them angry, resentful, and intolerant.

You argue that preference falsification can contribute to the appearance of extreme polarization by distorting public perceptions of the distribution of group preferences. How so?
Intolerant communities are never homogeneous. There are shades of opinion. Many members have reservations about specific policies. The differences don’t get much notice, however. One reason is that the communities are themselves are intolerant toward internal differences. They treat compromise by their members as treasonous. In reaction, community members hide their reservations. They pretend to share their group’s values and objectives in total, when in fact they have their differences.

In an availability chamber, ideas acceptable to the group get reinforced for two reasons: firstly, because the same information gets repeated again and again; secondly, because members with doubts refrain from speaking honestly. As a result, ideas that the group appears to deem acceptable become increasingly available in its public communications.

Can you give an example of how availability chambers are causing polarization in the United States today?
Here’s a concrete case.

People who consider immigrants the source of unemployment and other social ills interact exclusively with like-minded immigration opponents within online and offline availability chambers. For their part, people worried about discrimination against immigrants self-select into chambers of immigration supporters.

In each chamber there are people who know that the party lines involve exaggeration. They keep quiet for fear of being criticized and ostracized, or worse. Consequently, we are divided into two communication networks that have radically different views about the value of immigration to American society. Since the two sides rarely talk to each other, the huge gap in views persists indefinitely.

You’ve provided a dark and pessimistic view of current U.S. politics. Is there any room for hope?
A society may have multiple intolerant communities that co-exist in rough balance. That’s where the United States is today. The existing balance could continue indefinitely. The checks and balances grounded in the American Constitution could block their extreme plans. Along the way, elections could shift political power from one side to the other, back and forth.

This see-sawing may continue until one day a charismatic leader of a different mold — say, an American version of French President Emmanuel Macron — appears on the scene. He or she redefines the country’s challenges and forms a new coalition of moderates. The coalition draws from both of our current intolerant communities and also from the silent crowds that belong to neither community. With old taboos broken, a new political equilibrium is established. Long-festering issues are resolved through give-and-take.

Tens of millions of Americans recognize the dangers of polarization. Many of them are ready to accept middle-of-the road positions on various issues that divide us bitterly. They won’t say so openly now, but the right kind of charismatic leader can give them the courage to start speaking publicly for common sense solutions that involve give-and-take. These “centrist” or “moderate” Americans form a constituency for defending the virtues of dialogue and compromise.