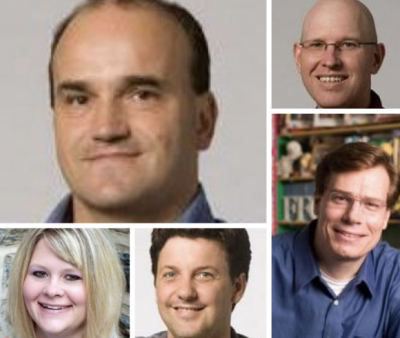 Peretto joined Economics in 1994, when the population of the department was much smaller than it is now. “I remember we had this faculty retreat, and it was a big soul searching exercise in which we add to look at each other in the eyes and ask, ‘Where do you want to go from here?’ We decided that they want to be an excellent, comprehensive department.” He emphasized that one thing he has loved about working at Duke is that he never felt pressured to compromise when it came to his research. He cites the intellectual freedom the department offers as part of what makes it stand out. He’s proud of the work he’s done professionally, but said, “If I have to identify the thing that I'm the most proud of and the happiest about is that the department now is in a different universe from when I joined. It took a lot of hard work, but in time we did it.”

Peter Arcidiacono is celebrating 20 years with Duke Economics. He began his career at Duke after graduating with his Ph.D. from University of Wisconsin. Arcidiacono specializes in research involving applied microeconomics, applied economics, and labor economics, with a focus on education and discrimination. Most recently, his work has been centered around higher education admissions in regards to affirmative action. In 2018, Arcidiacono was name as one of the 22 new Fellows of the Econometric Society.

Amy Clayton, Senior Program Coordinator for EcoTeach (the teaching arm of the department) has been at Duke for 20 years. “One of my favorite parts about my job is being able to help students throughout their academic career and making those personal connections with them, but what I love most about working in Econ are the people.” Clayton has been at the helm of EcoTeach for seven years, and has seen it through lots of ups and downs. However, she loves working at Duke and in the economics department. “There are many things that keep me at Duke, from the benefits, the community I have created here at Duke, to the endless opportunities it has provided.”

Described on ratemyprofessor.com as “brilliant, hilarious, and designs lectures to make you truly THINK”, professor Connel Fullenkamp celebrates 20 years in 2019. In 2015, Fullenkamp was awarded the Teaching and Technology Award, which is awarded to a professor that is innovative in their use of technology in the classroom. While Fullenkamp takes teaching seriously, he also has quite the sense of humor, which students and colleagues alike appreciate. “One thing I miss from my early days at Duke is the wooden boxes used to distribute The Chronicle.  Each wooden box had "The Chronicle" painted on it in black letters--but somebody had removed the final "le" from on every single box on campus.” It’s easy to see why students enjoy his classes so much.

Thomas Nechyba joined Duke as a professor in 1999 after working as an assistant professor at Stanford University. Nechyba established the formerly mention EcoTeach department as a way to help serve and support undergraduate students. He also served as department chair from 2003-2009, and recently stepped down as the director of the Social Sciences Research Institute at Duke. In 2017, Nechyba was awarded the Alumni Distinguished Undergraduate Teaching Award, nominated for “excellence and innovation in the classroom, in advising and mentoring students and faculty, and in providing leadership on projects central to the university’s educational mission.” In addition to these accolades, Nechyba is also the originator of the Duke Economics Turkey Fry, an annual holiday event that just celebrated it's 12th year.

Duke Economics wishes to thank all of these professionals for their dedication and commitment to the department.