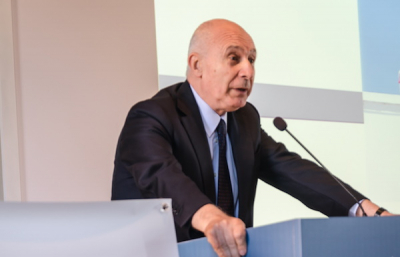 Toniolo, an Italian native, was born in 1942. He received his doctorate in economics from the University of Venice, Italy, and completed his postdoctoral studies at Harvard. Throughout his career, he held positions at Oxford, Hitotsubashi University in Japan and Tor Vergata University of Rome, among others.

He had a formidable impact on the field of economics.

Toniolo’s research focused on European economic history in the 19th and 20th centuries, with an emphasis on European economic growth, international monetary cooperation, financial history and distribution of welfare and income. He published several books on Italy’s economic growth, the Central Bank of Italy, and the global economy, as well as countless articles on the same topics in journals such as The Oxford Review of Economic Policy, The Journal of Economic History and Economic History Review.

In cooperation with Duke, Toniolo founded Venice International University, where he was the first director. He oversaw the renovation of San Servolo island, as well as laying the groundwork for the thriving academic community it is today. He brought together scholars from Duke, University of Architecture in Venice, Ludwig Maximilians-Universitaet , Universitat Autònoma de Barcelona, the Fondazione Cassa di Risparmio di Venezia (now Fondazione di Venezia) and the Provincia di Venezia (now Città Metropolitana di Venezia).

“Gianni Toniolo was Italy’s preeminent economic historian,” said former Duke Economics colleague Roy Weintraub. “His legacy as a remarkably knowledgeable and decent man whose passion for connecting scholars in different fields, and different countries, makes his too early passing a major loss for his many friends at Duke and his colleagues around the world.”

A funeral was held on Thursday, November 17, in the church of Santa Croce in Gerusalemme in Rome.  Toniolo is survived by Francesca Sanna Randaccio and his son Paolo Toniolo.