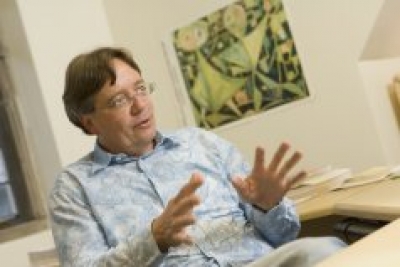 Last month financial econometricians convened for a conference at the Toulouse School of Economics (TSE) to celebrate the 30th anniversary of Professor Tim Bollerslev’s 1986 paper on the generalized autoregressive conditional heteroskedasticity (GARCH) model.

The GARCH model is a deceptively simple framework that is still used widely in the financial industry and academia as the model of reference for forecasting financial volatility.

“GARCH has had a profound effect on both financial econometrics, more broadly on all of financial economics, and even on abstract probability theory,” said Professor George Tauchen, who attended the May 13-14 conference.

GARCH builds upon Robert F. Engle’s Nobel Prize-winning autoregressive conditional heteroskedasticity (ARCH) model that characterizes and predicts volatility in the financial markets. Before ARCH, researchers used simple models of daily price changes that assumed a constant level of volatility. ARCH enabled them to assume that volatility changes over time, and that current volatility depends on past shocks (unpredicted changes) to prices. GARCH additionally allows current volatility to depend on past volatility.

Tauchen further explained how GARCH has influenced the study of volatility: “First and foremost, by implementing GARCH models we learned that financial volatility exhibits an extreme degree of persistence or momentum. In other words, the average, or mean level of volatility, evolves very slowly over time with swings on the order of many months or years, much like the business cycle of macroeconomics. Second, GARCH provides a very effective way to control for the time-varying variance in regression models. We know from elementary undergraduate econometrics that one must account for heterskedasticity in order to obtain reliable results. Third, finance derivatives like options and swaps derive their value from uncertainty. This uncertainty is, of course, time-varying volatility which GARCH models can capture and predict effectively. Fourth, and this is important but not very well known, high-level probability and math journals publish papers about the properties of GARCH-type models. The reason is that GARCH is what is called ‘self-exciting,’ meaning that its internal random fluctuations from the past affect nonlinearly the future path of volatility, and in some interesting and exotic ways. Probability theorists have proved very interesting theorems about the path-wise properties of GARCH models. I am not sure Tim himself is aware of all these papers, because the GARCH literature is just too vast.”

Beyond its impact in academia, the GARCH model has been instrumental in the finance profession for its applications in risk management.

“The magnitudes by which prices are expected to move are naturally associated with notions of risk. Risk, of course, is at the heart of financial economics and asset pricing finance, with most theories stipulating some kind of tradeoff between the risk of an asset and its return,” Bollerslev said. “As such, the ability to more accurately predict the risk is of the utmost importance for making good investment decisions. Similarly, the ability to effectively monitor and manage financial market risks obviously also depends crucially on actually being able to measure and predict the risks.”

It was while working as Engle’s research assistant at the University of California, San Diego that Bollerslev came up with the GARCH model.

He recalled, “As part of my work for Rob, I was estimating a bunch of different ARCH models for a paper on the so-called ARCH-in-Mean model. We had a hard time settling on which specific ARCH model to use. Did we need a model with four or five lags, one with equal or linear declining weights, etc.? I still remember sitting in Rob’s office pouring over lots of computer output, when David Hendry, who was visiting UCSD from Oxford University, walked in. David asked if we had considered extending the ARCH model, which he thought resembled the MA model from standard time series analysis, to an ARMA model? I went home and thought some more about it, which is how the GARCH model came about. In the process, I also realized that the ARCH model was not really an MA model, but that the GARCH model could indeed be thought of as an ARMA model. From then on it all went very quickly. Estimating the GARCH model with all kind of different time series, it almost always seemed to fit very well, and much better than the ARCH models we were using at the time. It also naturally solved the question of which specific ARCH model to choose?”

Bollerslev had no idea at the time how widely used the GARCH model would become, but it became evident as academic researchers and finance professionals used the model in their own work. Eventually, it was implemented in all of the commonly used statistical software packages, and included in several econometrics and finance textbooks. “Nonetheless, it still brings a smile to my face when I meet ‘random’ people all over the world, including people outside of academia, who have heard about the model and recognize my name,” he said.

Since TSE conference attendees met to discuss “30 Years of GARCH Models and Measures,” Duke Economics wanted to know what the future holds for financial econometrics. Bollerslev has his eye on further study of high-frequency intraday financial data, the advent of which already has changed the field dramatically.

“Further study of this rich data source will permit a better understanding of the functioning of markets, together with improved risk measurement, management, and monitoring procedures. At the same time, the special features of the data, including the sheer size, present a number of unique econometric challenges necessitating the development of new procedures for properly analyzing and modeling the data. Thus, even though this has been an unusually active area of research over the past decade, I feel that we have only started to scratch the surface, and that the decade ahead is poised to deliver many exciting new insights."