The First Day of Classes Start With Masks, Distancing and Vigorous Classrooms 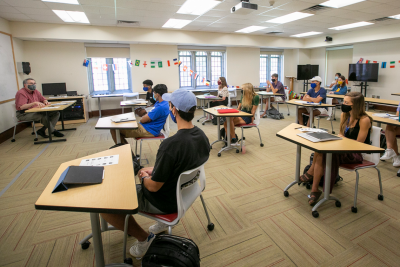 The signs of change were all around: Students walking around campus wearing face masks, talking to new friends in distanced circles.  Socializing tents scattered around campus. Seminars in large rooms with seats spaced out.

But the first day of classes also had much that was familiar. Students strolled along pathways with coffee and food-for-later in hand. Groundskeepers zipped past on riding mowers while joggers circled the East Campus loop, albeit giving each other plenty of room.

Most importantly, there was excitement in the classrooms, both in-person and remote.

For Professor Edna Andrews, director of Duke’s FOCUS program, the student enthusiasm about the semester left her optimistic. “I was amazed at how happy students were and how they had already made friends,” said Andrews following the welcome event for the popular first-year seminar program. “It was a huge turnout and they just kept coming. I was impressed with the good mood everyone was in and the enthusiasm they showed.”

This enthusiasm carried over into the classroom, where seats were spaced out so students could maintain their physical distance. FOCUS instructors like Ian MacMullen, associate professor of political science, said the first day in his Citizenship, Patriotism, & Identity course saw a strong amount of student engagement. “I was especially encouraged by the informal conversation that many of the students participated in with me for an hour after the formal class session ended,” he said. “They may be wearing masks and giving each other a wide berth, but they still seem engaged and engaging.”

Isha Shah, a first-year student from Warner Robbins, Ga., committed to Duke in the midst of the pandemic because of its emphasis on community. On Monday, her primary focus was on whether her Monday schedule, which included a chemistry class, would meet her academic expectations. “The way my online chemistry course is structured will probably account for any struggles that we’re going to have to face in the semester ahead,” Shah said after the class. “But I can already tell that I will be getting the high level of academic instruction that I’m hoping for by the way my professor connected applications of research to general chemistry today.” 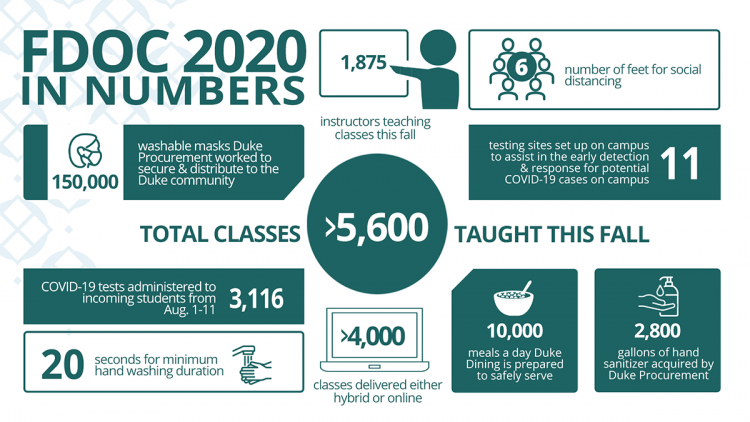 Amber Miranda, a freshman from Dallas, found many of the same dynamics at play in her Monday classes.

“It’s exciting,” she says, referencing her dystopian literature as well as her online chemistry class. “This is definitely not what I had in mind when I applied to college, but the feeling is already so different from my high school classes. Some students have really thought-provoking ideas that lead to interesting discussions.”

Her Zoom class does include new challenges. “The raise-your-hand feature in Zoom can throw the interesting sidebar discussions off track if you go in strict order, but I think this entire semester is going to be a learning curve for us all. People are going to need to be flexible — and I’m ready to do that.”

Professor of Biology Steve Nowicki knew from experience that interaction would be crucial to the success of his course exploring the mechanics of animal behavior, especially since it relies on encouraging students to pose and answer questions like a working scientist. He and his teaching assistant visited Love Auditorium in advance, making sure “the geometry” of the large lecture hall would allow for him to rotate among 16 students while the entire class worked in teams of four at a safe social distance.

One team attended the class virtually, fueling his concerns at how hard it might be for students to connect.

“It went really, really well,” Nowicki said. “It exceeded my expectations and the credit has to go to the students. There they were, in a huge lecture hall, sitting in an assigned seat, socially distanced from each other and wearing masks, but when they were asked to work in teams with each other, they really stepped up to the plate.”

Meanwhile, first-year economics major Simon Attenberger of Wisconsin experienced both in-person and online classes his first day and found himself surprised by how engaging his online class in German was.

“I was skeptical that there would be room for participation in a Zoom class,” Attenberger said. “But it was amazing. Everyone was really involved the whole time. The professor did a fantastic job. She only talked for about three minutes and then she began asking questions in German. It blew my mind the way the discussion just took off.

Other students such as Luke Triplett of Durham and Katy Burns of Westchester, NY, started their first day with large online classes — yet both felt the size of the class ended up being more important than the platform when it came to defining the course experience.

“My first class was a big lecture class,” Triplett explained as he shrugged off the experience of attending virtually, “So there’s not much discussion going on anyway.”

Burns agreed, although she also noticed a dynamic related to the unusual circumstances she and her fellow students find themselves in. “It definitely felt weird to see everyone’s faces,” she said of her Zoom-based class, “but also kind of nice.”